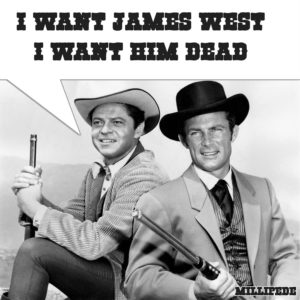 Artie Gordon has enough of da best friend.
Artie would like to fuck too nice babes.
He’s feeling like murdering, wild wild …
Can’t stand anymore disguising like a fat tramp.

I want James West
I want him dead

So now Artie has decided to make pay
For one hundred and four episodes.
Gang bang in the train ? Oh, no … Just watching !
First he will cut the penis, then will eat it.

I want James West
I want him dead

You know, James, I never told you, but I’ve been fucking President Grant.
The only one you’ll never have …
I want you dead …