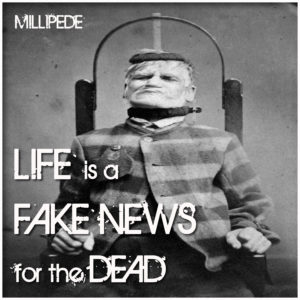 Watching the TV all night long,
Remote control, my only friend, you make me strong
Where will it rain tomorrow morning
Weather reports, fake news, say in Syria the sun is shinning.

Watching TV all day long
Breaking news : Donald’s twitting a military song
Hashtag North Korea I fuck you good
My bomb is bigger than my ass, so hang in the wood …

Life is a fake news for the dead
Breathe the air under the ocean of pain.

Freedom is a fake news for the people who don’t know
where the sun shines at night, elsewhere.

Donald is a fake news for USA.
His hair has a folder at the CIA.